An RNA-containing virus with isometric particles about 28 nm in diameter. It occurs in Brassica crops and is transmitted by flea-beetles and by inoculation of sap. It is not widespread or common, although it has a fairly wide experimental host range.

Recorded in Scotland, England and Yugoslavia.

It has a fairly wide host range, infecting species in about 20 dicotyledonous families. Readily transmissible by inoculation of sap.

Brassica pekinensis
or B. juncea are good hosts for maintaining cultures and as sources for purification.

None recorded; the virus reported by Verma & Varma (1961) was not proved to be turnip crinkle virus; the reactions in solanaceous plants suggest some other virus, and no serological or cross-protection tests were done using the type strain of turnip crinkle virus.

Transmitted by larvae and adult flea-beetles of the genera Phyllotreta (9 species) and Psylliodes (2 species). The virus was acquired within a few minutes and the beetles rarely remained infective for more than 1 day (Martini, 1958).

There are unconfirmed reports of transmission by larvae of the butterfly Pieris brassicae, leaf- mining larvae of the fly Phytomyza rufipes, hoppers of the locust Locusta migratoria and four species of aphid (Martini, 1958). Aphid transmission using Myzus persicae was not confirmed (Hollings & Stone, unpublished).

The virus is a good immunogen; rabbits immunized by one intravenous plus two intramuscular injections gave antisera with specific titres in precipitin tube tests of 1/2048. The precipitates are granular (somatic). In gel-diffusion tests a single reaction line is formed; good reactions are obtained with crude sap. In immunoelectrophoresis, the single antigen component moves to the anode (Hollings & Thorne, 1969; Fig. 7).

No serological relationships were found to any of twenty-seven other isometric viruses (Hollings & Stone, 1969) including carnation mottle, which McLeod & Markham (1963) suggested might be related (Tremaine, 1970).

In turnip or Brassica pekinensis sap the thermal inactivation point is 90-95°C, dilution end-point more than 10-6, and the virus survived at least 6 weeks at room temperature (c. 20°C). Lyophilized sap stored under vacuum at room temperature retained infectivity for at least 9 years.


2. Leberman (1966). Harvest plants 4-6 weeks after infection. Mince leaves and strain through muslin. Clarify by centrifuging at 12,000 g for 30 min. Add 1.34 g of a 20% solution of sodium dextran sulphate, 29 g of a 30% solution of polyethylene glycol 6000 and 5 g of 5 M NaCl to each 100 ml of clarified sap. Pour into separating funnel and leave to stand at 4°C overnight. Collect lower phase and interface, and centrifuge at low speed; discard supernatant fluid. Add 3 M KCl to the pellet, stirring until a thin creamy paste is obtained. Centrifuge at low speed; re-extract pellet with 0.5 M KCl if desired, and again centrifuge at low speed. Supernatant fluids are then centrifuged at high speed (30,000 rev/min) for 2 1/2 hr and the pellet resuspended in 0.l M disodium ethylene diamine tetraacetate, pH 7. The virus can be further purified by more cycles of high and low speed centrifugation, and resuspended in any of several buffers.

Electrophoretic mobility: In immunoelectrophoresis tests using 0.9% Ionagar in 0.03 M phosphate buffer, pH 7.6, the virus migrates as a single antigenic component towards the anode at a rate of 7.44 x 10-6 cm2 sec-1 volt-1.

Particles are isometric, about 28 nm in diameter in phosphotungstate, 33 nm in uranyl acetate. The intact virus is not penetrated by stain (Fig. 3). The particles contain 180 protein subunits of M. Wt 38,000 clustered in dimers in the 2-fold positions of a T=3 icosahedral lattice (Finch, Klug & Leberman, 1970). In addition it is suggested that there are 12 subunits of M. Wt 28,000 probably situated on the 5-fold axes and, possibly, a small amount of protein of M. Wt 80,000 which may represent the RNA polymerase (Butler, 1970). Small particles derived from the virus may represent inner cores (Haselkorn et al., 1961; Finch et al., 1970) but they can be produced by re-aggregation of the protein from degraded virus (Leberman & Finch, 1970).

All tissues are infected; no inclusion bodies reported, but plastid changes occur in some hosts (Stefanac, 1969). 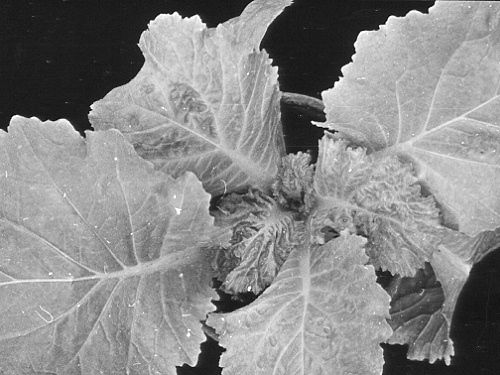 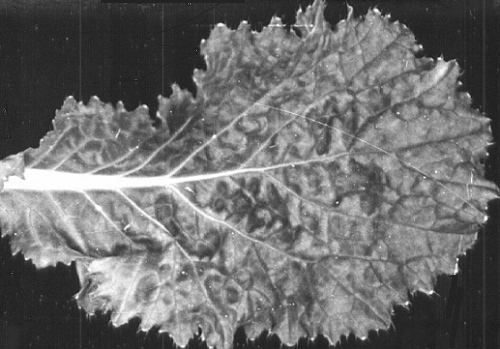 Systemically infected leaf of B. pekinensis showing crinkling and puckering. 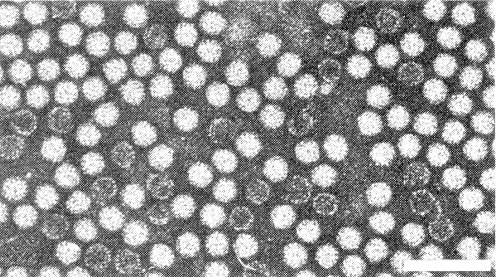 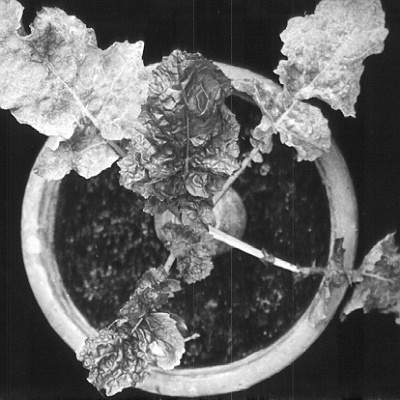 Systemically infected plant of B. rapa.