There is a more recent description of this virus: DPV 378.

This is a revised version of DPV 47

An RNA-containing virus with isometric particles about 24 nm in diameter. It has a limited host range, is transmitted mainly by beetles and readily by sap inoculation. Infected plants contain two kinds of nucleoprotein particle similar in size but differing in RNA content. Particles containing no RNA are also produced by most isolates. The RNA species in different particle types represent separate parts of the viral genome.

Causes mosaic diseases in Vigna spp. Leaf area and flower production are decreased. Yield reductions up to 95% have been reported. Late infections had less effect on yield than early ones (Chant, 1960). Bock (1971) reports the susceptibility of pigeon pea (Cajanus cajan) which is widely grown in the coastal areas of Kenya as a perennial crop and may serve as a reservoir of the virus.

The host range is rather limited; few hosts are known outside the Leguminosae. Almost all host species show necrotic or chlorotic lesions in inoculated leaves. Cowpea varieties differ greatly in type of reaction and severity of symptoms. Immunity, tolerance and hypersensitivity occur. Symptoms in susceptible varieties may range from a hardly discernible green mottle to distinct yellow mosaic and distortion with significantly reduced growth (Bliss & Robertson, 1971).

Vigna unguiculata
cv. Blackeye Early Ramshorn is a good source of virus for purification and for maintaining cultures.

Phaseolus vulgaris
cv. Pinto and Chenopodium amaranticolor are suitable local lesion hosts. For local lesion transfer Pinto beans should preferably be used because this host is not systemically infected and the lesions have a high virus content.

Chant (1962) mentioned the possibility that beetle-transmitted cowpea viruses from Trinidad (Dale, 1949) and Nigeria (Chant, 1959) were related strains. Agrawal (1964) classified five isolates into two strains and designated these as yellow and severe strains. A Nigerian isolate and the isolate SB from Surinam (collected at Santo Boma; Van Hoof, 1963) belonged to the yellow strain. A Trinidad isolate and two other isolates from Surinam represented the severe strain. Both strains were included in the previous Description of cowpea mosaic virus (Van Kammen, 1971). However, Swaans & Van Kammen (1973), having made a detailed comparison of the two strains, proposed that they be regarded as two different viruses of the cowpea mosaic virus group and this revised Description now deals only with the yellow strain. Because the SB isolate is designated as the type member of the comovirus group (Fenner, 1976), the name cowpea mosaic virus is maintained for the yellow strain. The severe strain will be described separately, as cowpea severe mosaic virus.

Nigerian and SB isolates do not seem to differ in host range and appear to be serologically identical or very similar (Agrawal & Maat, 1964). The same holds for the isolate from the USA and the SB-isolate (McLaughlin et al., 1977). Although there are some differences between host ranges of the Nigerian and the Kenyan isolates they are closely related serologically (Bock, 1971). The Cuban isolate (Kvicala, Smrz & Blanco, 1970) also has a different host range but was not tested serologically. However, because it infects Chenopodium amaranticolor systemically it should probably be grouped together with the above mentioned isolates of the former yellow strain. In the laboratory Bruening (1969) isolated from the SB-strain two naturally occurring variants which differed from the parent strain in the relative amount of RNA-free particles produced. De Jager (1973) isolated from the SB-strain two naturally occurring variants which, unlike the parent strain, infected Early Red cowpeas systemically. By treatment of virus particles or extracted RNA with nitrous acid, mutants may readily be obtained. Most of these mutants are characterized by less conspicuous symptoms and/or decreased virus production (De Jager & Van Kammen, 1970; De Jager, 1976; De Jager et al., 1977). Siler, Babcock & Bruening (1976) reported the isolation, after bisulphite treatment, of a mutant with greater specific infectivity.

The virus is strongly immunogenic. Standard methods using rabbits give antisera with titres of 1/1024 in the Ouchterlony double diffusion test, but higher titres may be obtained (Agrawal & Maat, 1964). Virus preparations tested by the Ouchterlony method give a single band of precipitate, even though they contain more than one electrophoretic component.

Properties in vitro reported for the various isolates vary considerably, probably because of the use of different source plants and/or assay hosts. Dilution end-points range from 10-4.7 to 10-6.7. Thermal inactivation points were reported from 55 to 65°C. Longevity in vitro was found to vary from 4 to 10 days.

Purified preparations of virus contain three centrifugal components: empty protein shells without RNA (T) and two nucleoprotein components (M and B), containing 25% and 36% RNA respectively. The separated nucleoprotein components are not infective (Van Kammen, 1968), but mixtures of the M and B components are. The infectivity of a mixture depends upon the proportions of the two components and the concentration of the component present in the lowest amount. Mixtures of the M or B components with the B or M components of mutants of cowpea mosaic virus are infective (Bruening, 1969; De Jager & Van Kammen, 1970; De Jager, 1976) but heterologous mixtures of components of cowpea mosaic virus and those of other comoviruses are not.

Purified preparations of the virus contain two electrophoretic components, each of which contains all three centrifugal components (Semancik, 1966). The electrophoretic forms can be separated by electrophoresis in a sucrose gradient. Electrophoretic mobility: -4.0 to -4.25 x 10-5 and -2.6 to -2.8 x 10-5 cm2 sec-1 volt-1 in 0.1 M phosphate buffer. The slower migrating form predominates in early infection and the faster one in late infection. The slower migrating form is converted into the faster migrating form in vivo by loss of a peptide with a M. Wt of approximately 2500 from the smaller capsid protein. The conversion of the slower form into the faster form can be achieved in vitro by incubation with proteolytic enzymes. The two electrophoretic forms of the virus have similar infectivity (Niblett & Semancik, 1969; Geelen, Rezelman & Van Kammen, 1973).

Particles are icosahedral with 5:3:2 axial symmetry, and a diameter of 20-24 nm (Fig. 4). By three dimensional image reconstruction of electron micrographs of particles negatively stained with uranyl acetate a model is proposed consisting of twelve pentamers of the larger coat protein at the 5-fold axes and twenty trimers of the smaller coat protein at the 3-fold axes (Crowther, Geelen & Mellema, 1974). In this model the protein shell consists of 60 subunits each composed of the two structural proteins arranged in interpenetrating T = 1 lattices.

In recombination tests with wild and mutant strains the 26 S RNA was shown to contain the gene specifying the smaller capsid protein (Gopo & Frist, 1977) and to be responsible for the relative amount of T-component produced (Bruening, 1969; De Jager & Van Kammen, 1970). The 34 S RNA seemed to control the rate of conversion of the slower into the faster electrophoretic form and the specific infectivity (Siler et al., 1976). Mutations in both RNA species were found to affect local and systemic symptoms and systemic spread of the virus in beans and cowpeas (De Jager & Van Kammen, 1970; De Jager, 1973; 1976). A mutation causing temperature sensitivity was located in the 26 S RNA (De Jager et al., 1977).

The virus particles occur scattered and in clusters throughout the cytoplasm. They do not form crystalline arrays. Inclusion bodies can be observed in virus-infected cells by the light microscope, after staining with phloxine, as a red amorphous mass near or surrounding the nucleus (Agrawal, 1964; Swaans & Van Kammen, 1973). Electron micrographs of virus-infected cells show cytopathic structures, often adjacent to the nucleus (Fig. 5), consisting of arrays of vesicles forming a kind of reticulum, the spaces between the vesicle areas being filled with electron-dense material that does not seem to have obvious structure. Virus particles can be seen embedded in this material. The vesicles often contain fibrillar material of unknown nature (De Zoeten, Assink & Van Kammen, 1974). The replication of viral RNA is closely associated with the membranes of the vesicles of the cytopathic structures as shown by fractionation of homogenates of virus-infected cells and autoradiography (Assink, Swaans & Van Kammen, 1973; De Zoeten et al., 1974). Infected Vigna leaves contain a RNA-dependent RNA polymerase which is closely bound to cytoplasmic membranes and is able to synthesize viral RNA in vitro (Zabel, Weenen-Swaans & Van Kammen, 1974). Similar cytopathic structures are found in Vigna mesophyll protoplasts infected with cowpea mosaic virus, but not in uninfected protoplasts (Hibi, Rezelman & Van Kammen, 1975).

Because of the small plots used for cowpea growing and the extreme prevalence of the beetle vector, the use of insecticides for vector control is not practicable. Use of resistant cultivars offers the best means of disease control. 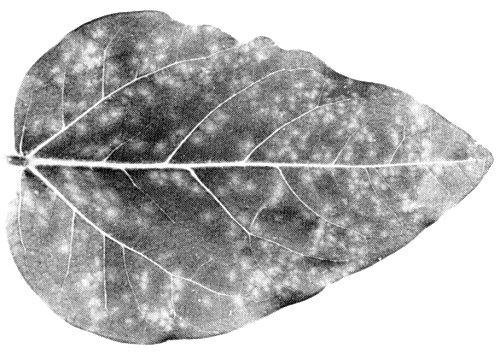 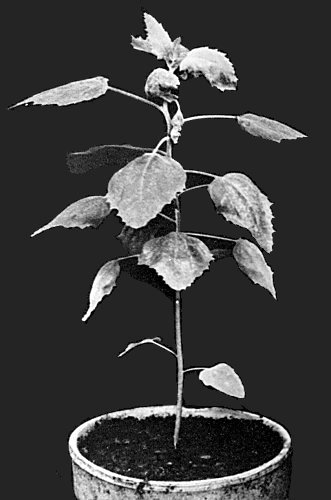