There is a more recent description of this virus: DPV 230

An RNA-containing virus with isometric particles about 28 nm in diameter. Host range is confined almost entirely to the Cruciferae. It has been reported from several areas of Western Europe. It may reach high concentrations in infected leaves, is readily sap transmissible, and is transmitted in the field by flea beetles.

Host range is confined almost entirely to the Cruciferae. Transmissible by inoculation of sap to many species in this family (Broadbent & Heathcote, 1958).

There is no definitive diagnostic species. Many strains give a bright yellow or yellow/green mosaic in Brassica pekinensis (Chinese cabbage) (Fig. 1) but others give much milder symptoms (Fig. 2). Non-hosts include Chenopodium amaranticolor, Cucumis sativus, Nicotiana tabacum and Phaseolus vulgaris.

Chinese cabbage is a good species for maintaining cultures and as starting material for virus purification. Growing temperatures in the range 20-25°C are best. Above 25°C yields of virus are less.

There is no reliable local lesion host. Most strains produce chlorotic local lesions in Chinese cabbage, their distinctness depending on the growing conditions. They appear most clearly defined when plants are inoculated young and then kept in artificial light of 8000 lux (or more) at 15-20°C. At 25°C or above lesions are much less distinct. Some strains, particularly those isolated from white areas in the mosaic, produce necrotic local lesions in Chinese cabbage. These are most distinct at 15-20°C.

The Cambridge culture (Markham & Smith, 1949). Stock cultures of the virus originating from Cambridge, England, consist of a mixture of closely related strains. Areas of different colour in leaves showing mosaic contain different strains of the virus (Fig. 2). It is not possible to isolate and maintain a pure culture of a single strain; single lesion isolates soon revert to a mixture like the original stock culture.

The Northumberland isolate (Broadbent & Heathcote, 1958). This isolate is serologically distinguishable from the above culture, and causes less severe symptoms in most hosts, but much more severe ones in cauliflower, cabbage and brussels sprout.

Groups of strains. Strains isolated from various places in Western Europe and studied on the basis of coat protein and RNA composition fell into two clearly defined groups (Symons et al., 1963). They were distinguished particularly by differences in the cytidylic acid content of their RNA (averaging 38.2% in group 1 and 41.6% in group 2).

Transmitted by various biting insects (Markham & Smith, 1949). The most important in natural transmission are probably the flea beetles (species of Phyllotreta and Psylliodes). These become infective after a few minutes’ feeding and then infect plants by feeding for only a few minutes. The mustard beetle Phaedon cochleariae and its larvae also transmit. Larvae acquired virus in 1-3 minutes’ feeding. There was a delay of about one day before they could infect. Ability to transmit was not retained through the pupal stage. Transmission by these and other leaf-eating insects is probably a purely mechanical process.

None recorded. Further tests are needed.

The nucleoprotein is strongly immunogenic in rabbits, the empty protein shells much less so. Precipitation tests in tubes, or immunodiffusion in agar give satisfactory results. The protein subunit of the virus shell does not cross react in precipitation tests with antiserum prepared against the intact viral shell.

In Chinese cabbage sap (pH = c. 6.0) some infectivity is retained after 10 min at 70°C but not at 75°C. Heat inactivation is much more rapid at pH 7.5 than at pH 6.0. At pH 6-7 infectivity decreases over a period of weeks either at room temperature or at 4°C. Dilution end-point in sap from fully infected plants is usually between 10-4 and 10-6.

The virus is readily isolated in good yield (0.5-2.0 mg/g fresh wt) from Chinese cabbage plants by either the ethanol-ammonium sulphate method of Markham & Smith (1949) or the pH 4.8 method of Matthews (1960). The ethanol-ammonium sulphate procedure is convenient for large scale preparations of the virus: care must be taken to keep the temperature below about 15°C while the virus is in contact with 30% ethanol. The pH 4.8 procedure is convenient for small scale preparations, especially where several are made simultaneously. Purified virus preparations can be fractionated into various classes of particle by centrifugation in CsCl density gradients. The virus crystallizes as octahedra from one-third saturated ammonium sulphate solution (Fig. 3).

Fractionation of purified preparations in CsCl density gradients yields at least three minor nucleoprotein fractions besides T and B1. Fraction B2 has about the same RNA content as B1 but has a higher buoyant density in CsCl. Fraction B0 has about two-thirds and B00 about one-third as much RNA as the intact virus. These three fractions are present to the extent of about 1-3% of B1. None of them is infective; nor do they enhance the infectivity of B1 (Faed & Matthews, unpublished).

Icosahedral symmetry, about 28 nm in diameter. Built of 180 protein subunits clustered into 20 hexamers and 12 pentamers (Finch & Klug, 1966). Electron micrographs of negatively stained virus show 32 morphological subunits (Fig. 5) with which the RNA is in part associated. Detailed arrangement of the RNA within the protein shell not known (Kaper, 1968).

RNA: Molecular weight about 1.9 x 106; 34% by weight of particle, single-stranded; may be in the form of a closed loop in the infective virus. Molar percentages of nucleotides for type strain: G17.2, A22.4, C38.3, U22.1. s20, w = 21.8 S in 0.01 M Tris buffer pH 7.5. RNA appears to be in one piece; a single break abolishes infectivity. A base-paired, double-stranded, ribonuclease-resistant form of the viral RNA can be isolated from infected tissues.

Other components; A polyamine, probably spermidine, is present (about 0.7% by weight of particle). No enzyme or lipid in particle.

Virus is present in all tissues of Chinese cabbage including the apical meristem region, but reaches highest concentration in the leaf lamina. However, dark green islands in the mosaic contain little or no virus and are essentially normal cytologically. In mesophyll cells containing virus, chloroplasts become rounded and clumped to form ‘X’-bodies (Fig. 4) (Chalcroft & Matthews, 1966). Electron microscopy reveals a variety of abnormalities in such chloroplasts depending on strain of virus and time after infection. The most constant feature is the appearance of numerous vesicles of variable size in the chloroplast, particularly near its surface. Site of virus synthesis is not established, but mature virus particles accumulate in the cytoplasm. A virus-specific RNA polymerase is reported from infected leaves.

Turnip mosaic, a rod-shaped virus, may cause similar macroscopic symptoms in turnip and Chinese cabbage but does not cause the chloroplast abnormalities characteristic of turnip yellow mosaic virus infection. Turnip crinkle and turnip rosette viruses are transmitted mechanically and by flea beetles and have similar stability in vitro. Turnip rosette virus has a similar host range largely confined to the Cruciferae and both viruses may cause rather similar symptoms in these hosts. However, these two viruses are not related to each other or to turnip yellow mosaic virus (Broadbent & Heathcote, 1958; Symons et al., 1963), and the particles of both turnip crinkle and rosette viruses sediment as a single component. Extracts from leaves infected with turnip yellow mosaic virus give a characteristic pattern on sedimentation in the analytical ultracentrifuge (Fig. 6). 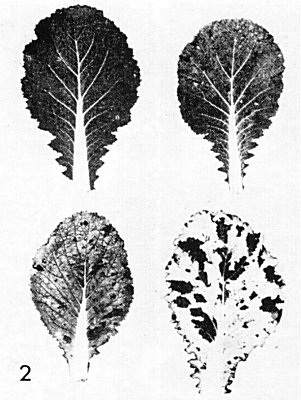 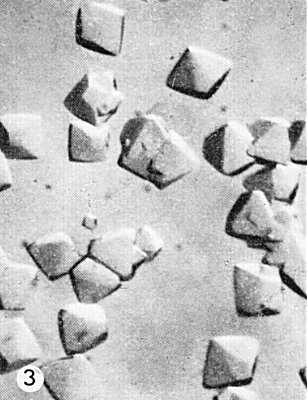 Electron micrograph of a thin section through an infected Chinese cabbage cell, showing clumping and rounding of chloroplasts (C), and the presence of numerous vacuoles (V), especially near the surface of the chloroplasts. Bar represents 1 µm. (Photo courtesy of R. Ushiyama.) 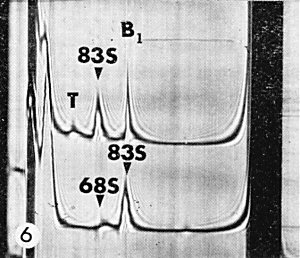