Squash leaf curl virus (SLCV) is a virus with geminate particles, 22 x 38 nm. The circular ssDNA genome is bipartite and consists of two similar-sized species. Known hosts are in the Cucurbitaceae, Leguminosae, Solanaceae and Euphorbiaceae. The virus is transmitted by the whitefly, Bemisia tabaci, and by inoculation with sap. Squash leaf curl disease occurs in desert regions of southwestern USA and Mexico.

The disease is common in cultivated low desert areas of California, Arizona and Texas in the USA, and also in adjacent desert regions of northern Mexico.


No local lesion hosts are known. Cohen et al. (1983) used infectivity assays based upon the proportion of C. pepo plants infected following whitefly inoculation. Infectivity of cloned DNA has been assayed by mechanical inoculation to N. benthamiana, or by Agrobacterium-mediated inoculation to N. benthamiana and P. vulgaris (Lazarowitz & Lazdins, 1991; Lazarowitz, 1991). Mechanical transmission assays with crude sap inocula have been reported for a wide host range isolate of SLCV (Brown & Nelson, 1986). SLCV was transmitted by B. tabaci that had acquired virus by feeding on inoculum through a membrane (Cohen et al., 1983).

Isolates of SLCV may be grouped into at least two strains based upon host range:

1. SLCV-2 (Dodds et al., 1984) and MLCV (Duffus et al., 1985) from the Imperial Valley, California, USA, and WMCMoV (Brown & Nelson, 1984; 1986) from Arizona, USA are able to infect watermelon, melon, and cucumber. MLCV and WMCMoV were initially described as distinct viruses, but may be considered, along with SLCV-2, as isolates of a wide host range strain of SLCV. They are closely related to a fourth isolate (SLCV-E, Polston et al., 1989) for which infective DNA clones have been characterized and completely sequenced (Lazarowitz & Lazdins, 1991; Lazarowitz, 1991).

2. The SLCV isolate of Cohen et al. (1983) has a narrow host range which does not include watermelon, melon or cucumber. An additional narrow host range isolate (SLCV-R) was cloned from a mixed culture also containing SLCV-E (Lazarowitz & Lazdins, 1991; Lazarowitz, 1991). Host range properties of SLCV-R are complex, with restriction in certain species being determined by variants of the DNA B component (Lazarowitz, 1991). Nucleic acid hybridization tests with component-specific probes (Polston et al., 1989) suggest that SLCV-R and the SLCV isolate of Cohen et al. (1983) are isolates of the same strain.

Antiserum produced in a rabbit injected with purified virions yielded a titre of 1/128 in double diffusion tests, and a titre of 1/1028 in density gradient serological tests (Cohen et al., 1983). This same antiserum has been used in ELISA (1/800 dilution) to detect SLCV antigen in infected plant samples (Polston et al., 1989) and to discriminate among Begomovirus species (Cohen et al., 1983). ISEM has been used for detecting the virus and its relationships to other Begomovirus species (Roberts et al., 1984).

SLCV shares biological and physical properties with geminiviruses in the genus Begomovirus (equivalent to subgroup III as defined by Matthews, 1991): it has a host range restricted to dicots (Cohen et al., 1983; Dodds et al., 1984; Brown & Nelson, 1986; Polston et al., 1989; Lazarowitz & Lazdins, 1991), is transmitted by the whitefly B. tabaci (Flock & Mayhew, 1981; Cohen et al., 1983; Dodds et al., 1984; Brown & Nelson, 1986), and possesses a bipartite genome (Lazarowitz & Lazdins, 1991) with an organization similar to those of other begomoviruses. Phylogenetic studies indicate that SLCV clusters within a clade consisting of other New World begomoviruses (Padidam et al., 1995). An ancestor of SLCV appears to have recombined with an ancestor of beet curly top virus to produce the genome of horseradish curly top virus (Klute et al., 1996).

No information concerning stability in sap is available, although most isolates have been transmitted mechanically. Purified virus preparations retained infectivity for at least 2 months at 4°C, as shown by assays in which whiteflies were allowed to acquire purified virus by feeding through Parafilm membranes (Cohen et al., 1983).

Electron microscopy of purified particles prepared by negative staining in 2% uranyl acetate indicates that the majority of virions occur as paired geminate particles, 22 x 38 nm (Fig. 5). Unpaired ‘monomer’ particles measuring 22 nm are also present in purified preparations, and may be formed by disruption of geminate particles, or possibly may encapsidate half-unit length deletion derivatives of the viral DNA components. Although less abundant, ‘trimer’ (22 x 53 nm) and ‘tetramer’ (22 x 70 nm) particles also may be seen in purified preparations. The biological significance of monomer, trimer and tetramer particles is unknown.

Nucleic acid: Two similar-sized species of circular, ssDNA (A and B, approximately 2600 nucleotides each) are present in virus particle preparations. Although each DNA species is thought to be encapsidated into separate, morphologically identical particles, this has not been established unequivocally.

Protein: The number and size of polypeptides present in the capsid of SLCV has not been determined by direct examination. However, determination of the nucleotide sequence of SLCV-E (Lazarowitz & Lazdins, 1991) indicates that the AR1 ORF encodes a 29.2 kDa protein that is highly conserved with the coat protein of other begomoviruses.

Electron micrographs of vascular cells of infected squash leaves revealed the presence of virions (Hoefert, 1983; 1987) and fibrillar rings within nuclei (Hoefert, 1983). Hoefert (1983) also reported that vascular parenchyma cells contain cytoplasmic vesiculations not previously associated with other plant viruses that infect vascular tissue. The virus is also associated with maturing phloem sieve elements which may exhibit severe necrosis in as little as 9 days post-inoculation (Hoefert, 1987). The BR1 protein binds viral ssDNA and localizes to the cell nucleus (Pascal et al., 1994). The BL1 protein interacts with the BR1 protein and redirects the BR1 protein (and presumably SLCV DNA) to the cell periphery (Sanderfoot & Lazarowitz, 1995).

SLCV may be distinguished from other cucurbit-infecting viruses by mode of transmission, and by serological or nucleic acid hybridization assays with cloned DNA probes (Polston et al., 1990). Displacement of the B. tabaci A biotype by the B biotype may be responsible for the reduced occurrence of SLCV in southwestern USA. 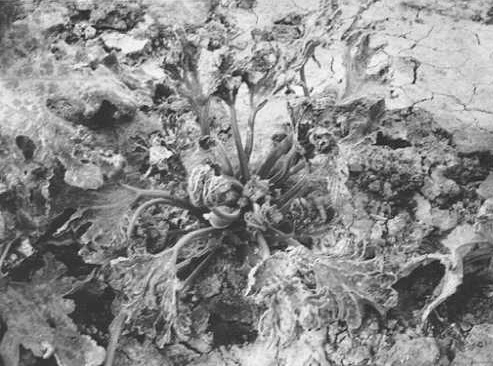 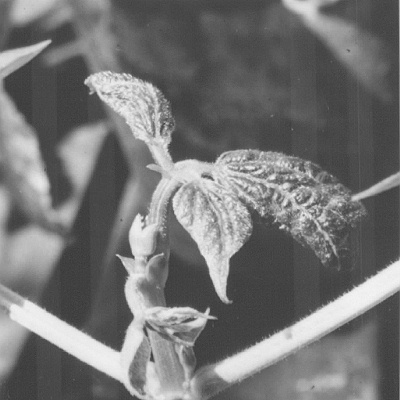 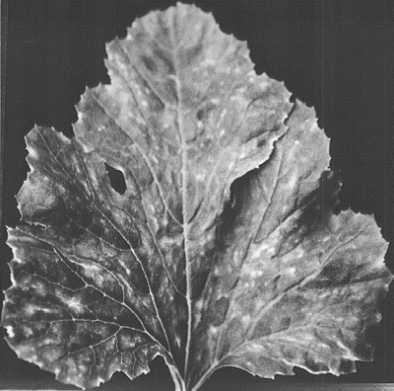 Systemic symptoms on young squash with distortion and mottling.

Genome organization of SLCV based upon the nucleotide sequence of SLCV-E as determined by Lazarowitz & Lazdins (1991). Circles represent the individual DNA components (A and B), arrows denote the location and polarity of viral ORFs, and stippled regions denote limits of the Common Region (CR) sequence conserved in the two genome components. Sizes of proteins encoded by individual ORFs are expressed in kilodaltons (kDa).