A virus with filamentous particles c. 750 nm long and 12 nm in diameter. Known only in narcissus. The virus is transmissible by the aphid Myzus persicae and induces, in plant host cells, pinwheel inclusion bodies typical of potyviruses. It is the most common infection in commercial stocks of narcissus. Stocks of several important cultivars are totally infected and the geographical distribution of the virus reflects that of commercial stocks of narcissus.

Prevalent in commercial stocks of many important narcissus cultivars, e.g. Dutch Master, Golden Harvest, Grand Soleil d’Or and Rembrandt. Stocks of some cultivars seem to be totally infected. Symptoms in the form of narrow chlorotic streaks and elliptical markings are restricted to leaves (Fig. 1) and flower stems. Plant parts are not malformed and plant stature is not obviously affected. Irrespective of cultivar, symptoms appear at the earliest about 2-3 weeks after flowering but may develop any time thereafter up to the onset of senescence. Symptoms may not recur every year, although plants remain infected.

Identified by serological testing in the UK and The Netherlands. Worldwide distribution can be assumed from the international trade in NLSYV-infected stocks of commonly grown narcissus cultivars.

Narcissus is the only known host but not all cultivars are susceptible to infection (Mowat & Dawson, 1988). The virus failed to infect 12 other plant species following manual inoculation (Mowat et al., 1988). Symptoms, consisting of narrow chlorotic streaks and elliptical markings, are usually sharply defined, angular, pale green to yellow, and may occur in part or all of the leaf or flower stem (Fig. 1). The symptoms develop after flowering and may not be expressed every year. Affected plants produce normal-looking flowers. Cultivars differ in their susceptibility to field infection (Mowat & Dawson, 1988).

The virus particle is a good antigen and antisera prepared in rabbits were suitable for trapping and coating virus particles (Fig. 3) for electron microscope examinations and for use in F(ab')2 and dot-blot forms of ELISA (Mowat et al.,1988; W. P. Mowat & S. Dawson, unpublished data). Variable background readings in ELISA were suppressed by diluting the antiserum used for virus detection with sap from healthy narcissus or Nicotiana clevelandii. Applied from June onwards, F(ab')2-ELISA is more reliable than observation of symptoms for detecting the virus. Greater sensitivity and earlier detection (April) is provided by dot-blot ELISA on untreated nitrocellulose membrane using a protein A-enzyme conjugate to detect bound antibody and incorporating the surfactant Tween 20 in the sample extraction buffer (W. P. Mowat & S. Dawson, unpublished data).

The virus is tentatively placed in the genus Potyvirus because of its particle morphology, induction of cytoplasmic inclusions typical of the family Potyviridae and transmission by aphids. It also shows serological relationships with two definitive potyviruses: potato Y and turnip mosaic viruses; and one tentative potyvirus: alstroemeria mosaic virus.

There is no information on the survival of infectivity in sap extracts. Some purification procedures recover virus particles from fresh diseased leaves but not from frozen diseased leaves or their buffer extracts that had been stored frozen at -20°C (see Purification).

Several purification procedures suitable for other potyviruses were unsuccessful with NLSYV. In earlier work (Mowat et al.,1988), the following method gave reasonably consistent results and was that used to provide particle immunogen:

Homogenize 100-200 g of fresh diseased leaf in 0.3 M sodium citrate containing 10 mM sodium EDTA and 10 mM sodium DIECA, pH 7.4 (3 ml/g leaf). Centrifuge the extract, separated from the leaf fibre by squeezing through a double layer of muslin, at 10,000 g for 10 min. Recover the supernatant fluid and centrifuge at 180,000 g for 3 h. Resuspend the pellets in 5% of the original volume of extraction buffer, remove aggregated material by centrifugation at 10,000 g for 10 min and emulsify the supernatant fluid with an equal volume of diethyl ether. Recover the aqueous phase by centrifugation at 10,000 g for 10 min and remove the final traces of organic solvent by bubbling nitrogen gas through the preparation. Repeat the cycle of differential centrifugation, using 0.03 M citrate buffer, pH 7.4, as the resuspending medium. Purify further by isopycnic banding in Cs2SO4 (r =1.33) in a Beckman SW50.1 rotor at 35,000 rev/min for 18 h at 25°C. Preparations containing much non-viral particulate material require gel filtration on Sepharose CL2B before isopycnic banding. Key factors affecting purification of virus particles by this procedure are the use of citrate buffer and clarification with diethyl ether after the first cycle of differential centrifugation.


A simpler method (S. Dawson, unpublished data) recovered virus particles successfully from either frozen or fresh diseased leaf. Homogenize not less than 100 g diseased leaf in 0.067 M phosphate buffer, pH 7.4, containing 10 g/litre of sodium sulphite and 20 mM sodium EDTA (3 ml/g leaf) and express the extract through muslin. Emulsify the extract with an equal volume of diethyl ether, stir vigorously for 10 min and recover the aqueous layer by centrifugation at 10,000 g for 10 min. Precipitate virus particles from the aqueous fluid by stirring for 2 h with polyethylene glycol (mol. wt 6000; 80 g/litre) and collect by centrifugation at 7500 g for 10 min. Resuspend pellets overnight at 5°C in 0.067 M phosphate buffer, pH 7.4, (30% of extraction volume) and centrifuge at 7500 g for 5 min. Re-precipitate the virus particles by stirring with 50 g/litre polyethylene glycol plus 0.3 M sodium chloride and resuspend as before in 4% of the previous resuspending volume, followed by centrifugation for 10 min at 7500 g. Adjust volume of particle preparation to 7 ml with the resuspending buffer, dissolve 1.05 g of Cs2SO4 in the preparation, and layer over 3 ml of 530 g/litre Cs2SO4 in the same buffer in Beckman R75Ti tubes. Centrifuge at 50,000 rev/min for c. 17 h at 20°C (163,000 g); two bands are formed and particles are recovered from the lower, and sometimes also the upper, band.

In addition to NLSYV, three other potyviruses have been named from the association of virus particles with symptoms in naturally infected narcissus plants: narcissus degeneration, narcissus white streak and narcissus yellow stripe viruses. The implications of the widespread occurrence and prolonged latency of NLSYV necessitate a reassessment of the aetiology of these other diseases (Mowat et al., 1988). NLSYV particles are serologically distinct from those of narcissus degeneration virus and the viruses exhibit phenotypic mixing of the particle coat protein. By contrast, in plants affected with white streak, all particles detected were serologically related to NLSYV, but the cause of white streak disease remains uncertain. Narcissus yellow stripe disease is now known to be associated with a virus with particles 660 nm long containing a single protein of Mr 45,000 and producing pinwheel inclusion bodies typical of Potyviridae (Mowat et al., 1991). These revised properties of this virus, which was previously described as narcissus latent carlavirus (Brunt, 1976), clearly distinguish it from currently recognized virus genera.

Narcissus cultivars differ in their susceptibility to field infection by NLSYV (W. P. Mowat & S. Dawson, unpublished data) and some cultivars seem to be immune to infection. Less clear-cut is the instance of cv. Carlton, some commercial stocks of which seem immune whereas others show partial infection (W. P. Mowat & S. Dawson, unpublished data). Clonal selection of this cultivar for virus-free stock programmes could result in the production of lines highly susceptible to infection. 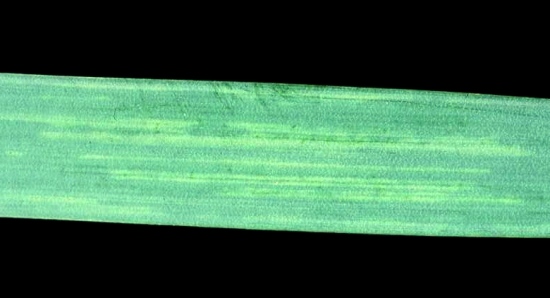 Narcissus late season yellows symptom in a leaf of a virus-tested plant of cv. Golden Harvest in the year after aphid inoculation with NLSYV from a naturally infected plant of cv. Corinthian. 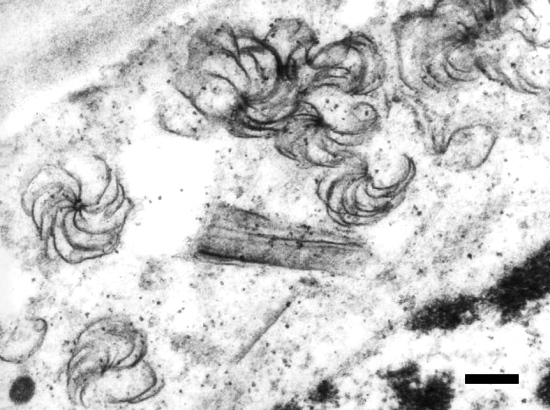 Particles of NLSYV from a purified preparation, reacted with homologous antiserum and stained with sodium phosphotungstate, pH 6.0. Bar represents 250 nm.