A virus with isometric particles c. 40 nm in diameter with a wide host range. Transmissible by inoculation of sap, by aphids in the non-persistent manner and also by some Cuscuta species. The virus occurs commonly in south-eastern Europe and rarely in central Europe.

Species of Robinia, especially R. pseudo-acacia, seem to be the only natural hosts, but about 75 plant species in 15 dicotyledonous families have been infected experimentally by sap inoculation (Schmelzer, 1967a), including the following:

Nicotiana glutinosa
(Fig. 6) is suitable both for maintaining cultures and as a source of virus for purification.
N. megalosiphon is also good for maintaining the virus.
Useful amounts of the virus may be obtained from infected N. tabacum except in summer.

Not well studied. Isolates differ in virulence and host range. For example, strain Ro 25, isolated in Hungary (Schmelzer, 1967a), induces chlorotic local lesions as well as mosaic and leaf deformation in Chenopodium quinoa throughout the year, whereas less virulent isolates become systemic in this species only during the winter.

The aphids Myzus persicae and Aphis craccivora transmit the virus in the non-persistent manner. The transmission rate is rather low. The aphids acquire the virus within 10 min and there is no latent period. Aphis craccivora seems to be the most important vector in nature (Schmelzer & Milicic 1965).

Possible with Cuscuta californica, C. campestris and C. subinclusa. The virus infects the dodder (Schmelzer, 1967a).

The virus is moderately antigenic. Antisera with titres of 1/128 are readily obtained. The virus reacts well with specific antiserum in agar gel double diffusion tests, which may be done with extracts made by grinding infected Chenopodium quinoa leaves with an equal amount of 0.067 M phosphate buffer (pH 7) or 0.85% NaCl solution. Only one band of precipitate is formed (Schmelzer, 1967a).

Using Chenopodium quinoa as virus source and test plant, the thermal inactivation temperature lies between 66 and 72°C, the dilution end-point above 10-4, and infectivity is retained at 20-22°C for 5-10 days.

Homogenize infected tissue with an equal amount of 0.067 M phosphate buffer (pH 7.0) containing 0.3% (w/v) sodium sulphite and 0.3% (w/v) ascorbic acid. Shake the resulting extract thoroughly with twice its volume of ether and, after removing the ether and the coagulated plant material, with half a volume of carbon tetrachloride. Centrifuge at low speed and retain the aqueous phase. Concentrate the virus by one cycle of high and low speed centrifugation. Resuspend in neutral 0.067 M phosphate buffer.

All tissues seem susceptible with the possible exception of the meristematic regions. 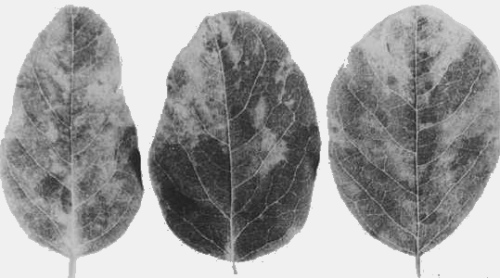