An RNA-containing virus with isometric particles about 25 nm in diameter. It has a wide host range, is transmitted by at least three species of aphid in the non-persistent manner and is readily transmissible by inoculation of sap. Widely distributed throughout the world but of minor economic importance.

Broad bean cv. Cole’s Prolific is suitable for maintaining cultures of the broad bean strain and as a source of virus for purification. After the initial necrotic reaction the concentration of virus falls, but some virus may be recovered throughout the life of the plant. With nasturtium, parsley and petunia ringspot strains, Nicotiana clevelandii is a suitable host for maintaining cultures and Chenopodium quinoa is a good source of virus for purification.

The most important strains are:

The type strain of Stubbs (1947). Source Australia. After numerous transfers in broad bean this strain lost ability to cause much necrosis, indicating that strain selection had occurred. All Australian isolates produce identical symptoms in broad bean.

The nasturtium ringspot strain of Smith (1949a, 1949b, 1950). Source UK. The parsley isolate of Frowd & Tomlinson (1970) may belong to this strain. Less virulent than the type strain in broad bean.

The Petunia ringspot strain of Rubio (1959). Source Spain. Less virulent than the type strain in broad bean and Datura stramonium.

Poorly developed bands of precipitate are obtained with sap from infected broad bean plants unless leaves are ground in buffer containing a reducing agent (for each 1 g of tissue use 1 ml 0.05 M phosphate buffer containing 0.1% thioglycollate + 0.1 M diethyldithiocarbamate at pH 7.6).

RNA: probably single-stranded. The T, M and B particles contain 0, 22 and 33% RNA respectively. Infectivity seems to be almost entirely associated with the B particles. Molar percentages of nucleotides for the broad bean wilt isolate are G25; A30; C18; U27; similar results were obtained for nasturtium ringspot and petunia ringspot isolates (T. Doel, pers. comm.).

In New South Wales the virus is present in weed hosts but does not appear to cause any diseases of economic plants. In Victoria, the disease appears to be restricted to broad beans in urban localities and may be less prevalent now than in the past. In USA (Schroeder & Provvidenti, 1970) and Japan (Y. Komuro, pers. comm.) it causes a severe disease of spinach which may be confused with that caused by cucumber mosaic virus. The particles of broad bean wilt virus closely resemble those of viruses of the cowpea mosaic virus group in size, appearance, sedimentation behaviour, nucleic acid content and composition; however, broad bean wilt virus is transmissible by aphids, whereas viruses of the cowpea mosaic virus group are transmissible by beetles or have no known vectors. 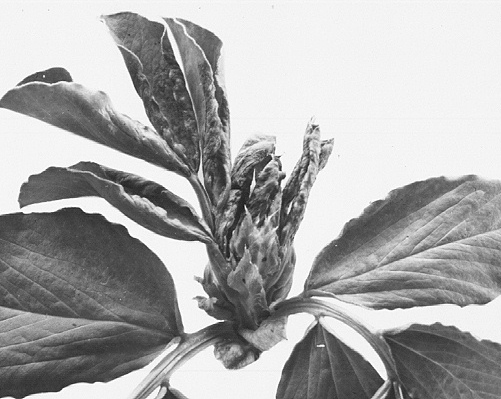 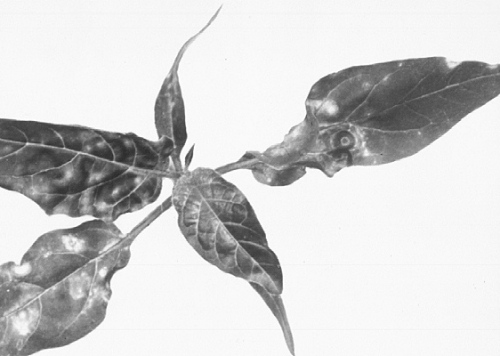 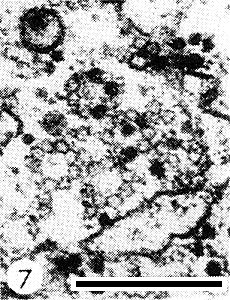