An RNA-containing virus with filamentous particles about 580 nm long. It is transmitted by aphids in the non-persistent manner only when aided by certain ‘helper’ viruses, and is readily transmitted by mechanical inoculation.

Causes yellow spotting or necrosis of potato leaves and necrosis in potato tubers, but is rare and consequently of little economic importance.

World-wide but uncommon. The virus was prevalent in a few potato cultivars no longer grown commercially.

The type and intensity of the symptoms in potato plants depend on the strain of virus and the cultivar of potato. The two main types of symptom are: (1) bright yellow spots on the lower leaves, later coalescing to form large yellow or whitish patches (Fig. 1); (2) necrotic spots, often leading to systemic or top necrosis (Fig. 2) (Clinch, 1941). Some infected plants do not show foliage symptoms, especially during the second and subsequent years of infection and when growing under glass. During storage the tubers of many cultivars develop necrosis in the cortex and pith (Fig. 4) visible on the surface as irregularly shaped, brown patches or sunken dry brown areas (Fig. 3). Virulent virus strains may kill the tuber eyes.

N. tabacum cv. Xanthi-nc is a good plant for maintaining the virus and a good source of virus for purification. Maximum virus concentration is found in inoculated leaves 10 days after inoculation using carborundum.

Transmitted by Myzus persicae in the non-persistent manner but only when aided by certain ‘helper’ viruses of the potato virus Y group, of which potato virus A and potato virus Y are the most efficient. Aphids transmit it from plants also infected with the ‘helper’ virus, or after feeding first on a source of ‘helper’ virus and then on a source of potato aucuba mosaic virus (Kassanis & Govier, 1971a; 1971b). In these conditions aphids can acquire the virus in 1 min. Starving aphids lose infectivity in a few hours.

Not known; it is transmitted through the tubers produced by infected potato plants.

The virus is strongly immunogenic and antisera with titres in excess of 1/10,000 are readily obtained. The virus gives flocculent precipitates in tube-precipitation tests.

Strains of the virus are closely related to one another serologically and an avirulent strain protects potato plants from infection with a virulent strain. No serological relationship with other viruses has been demonstrated but potato aucuba mosaic virus resembles viruses of the potato virus X group morphologically.

In tobacco sap, the thermal inactivation point (10 min) of most strains is between 65 and 70°C, the dilution end-point between 10-5 and 10-6, and some infectivity remains after 1 to 2 months at 18 to 20°C in sap diluted 1/10, when inoculated using carborundum (Kollmer & Larson, 1960). The virus concentration is greater in the inoculated leaves of tobacco than in systemically infected ones, reaching a serological titre of 1/512 about 10 days after inoculation.

We find that the method described by Juo & Rich (1969) gives very aggregated preparations. The following method (D. A. Govier & B. Kassanis, unpublished) gives infective, largely unaggregated, preparations with yields of about 100 mg virus from 1 kg of leaves. Homogenize leaves in a cooled blender with 0.1 M ethylenediaminetetra-acetate pH 7.6 containing 0.01 M Na-diethyldithiocarbamate (DIECA), 2 ml/g tissue. Squeeze the sap through muslin, clarify by centrifuging for 30 min at 15,000 g, dialyse for 18-24 h against 10 volumes of 0.005 M DIECA, and reclarify. Shake the supernatant fluid for 5-10 min with 1/4 volume of chloroform, centrifuge, and subject the aqueous phase to 2 cycles of differential centrifugation (50 min at 100,000 g and 10 min at 15,000 g), resuspending the virus pellets in 0.01 M borate pH 7.5. Aggregation is largely prevented by leaving pellets covered with buffer overnight at 5°C before resuspending, by concentrating only slightly when resuspending the first high-speed pellets and, when a large weight of leaves is used, by infiltrating the leaves with extracting solution under vacuum before homogenizing them.

Particles are filamentous, about 580 nm long and 11 nm wide (Fig. 8). They often aggregate end-to-end and side-to-side. 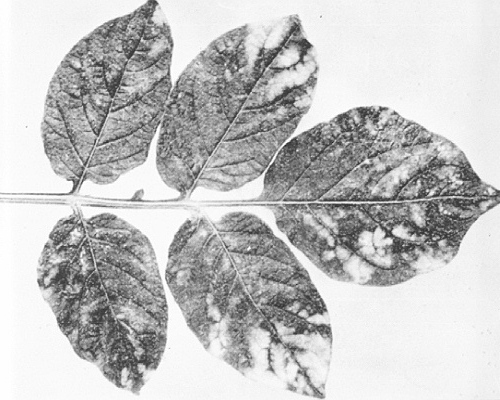 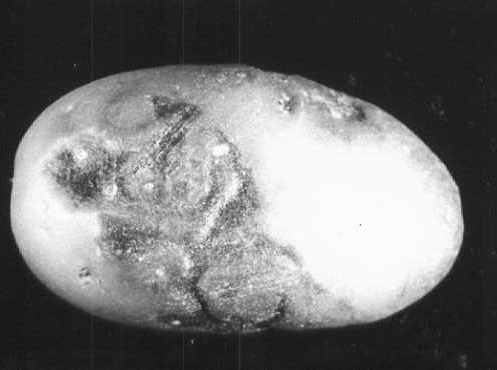 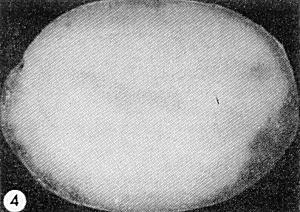 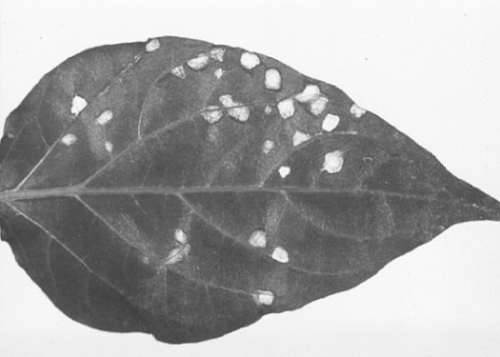 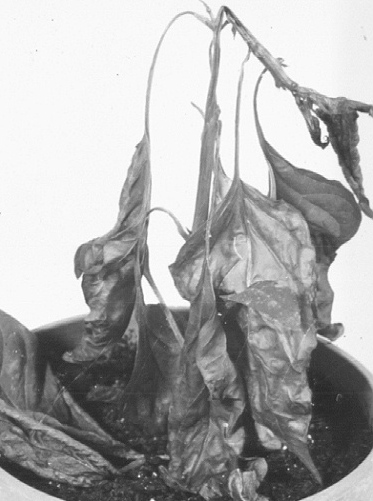 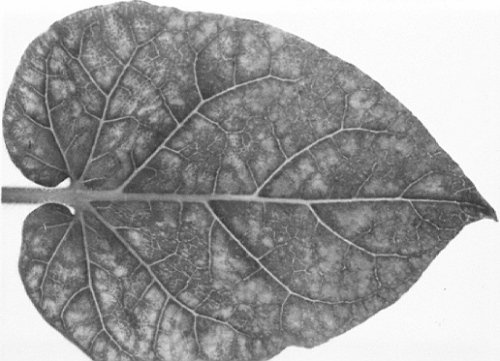