This is a revised version of DPV 6

Described by Cadman (1956) and Harrison (1958).
Selected synonyms
Raspberry Scottish leaf curl virus (Rev. appl. Mycol. 32: 387).
Red currant ringspot virus (Rev. appl. Mycol. 31: 245).
A virus with isometric particles about 28 nm in diameter sedimenting as three components and containing two functional pieces of RNA. It is readily sap-transmissible, has a wide host range, infects the seed of many host plants and is transmitted by nematodes (Longidorus spp.). Found in Europe, Turkey and the former USSR.

Causes ringspot diseases of raspberry (Fig. 4) and strawberry, spoonleaf of redcurrant and, in association with viruses of the prunus necrotic ringspot type, is one of the causes of rasp-leaf symptoms in cherry. It occurs in many other plants, including grapevine and Narcissus. Disease ‘outbreaks’ often appear as obvious patches in crops (Fig. 8).

Occurs naturally in many species of wild and cultivated monocotyledonous and dicotyledonous plants. Species in more than 14 dicotyledonous families are susceptible. Infects nearly all commonly used herbaceous test plants.

The English strain (Harrison, 1958; Cadman, 1960), which differs from the Scottish strain serologically and in vector relations (see below).

The Lloyd George yellow blotch (LG) strain (Murant, Taylor & Chambers, 1968), which infects varieties of raspberry immune to the Scottish strain but is serologically similar to it, although much less virulent in herbaceous hosts.

Transmitted by free-living soil-inhabiting nematodes (Longidorus spp.). The Scottish strain and strains closely related serologically are transmitted most efficiently by L. elongatus, the English strain by L. macrosoma (Taylor, 1962; Harrison, 1964; Taylor & Murant, 1969). L. elongatus transmits the English strain moderately well experimentally but has not been found associated with it in the field; similarly the Scottish strain has not been found in association with L. macrosoma. Vector specificity seems dependent on the properties of the particle protein, and pseudo-recombinants between Scottish and English strains have the vector specificity of the parent contributing RNA-2, which carries the coat protein gene (Harrison et al., 1974). Apparent transmissions in pot experiments by L. caespiticola, L. leptocephalus and X. diversicaudatum (Valdez, 1972) are probably explained by contamination (McNamara, 1978).

Larvae and adults of L. elongatus both transmit, but the virus does not multiply in the vector and there is no transmission through the egg, nor is the virus retained when the nematode moults (C. E. Taylor, unpublished data). L. elongatus kept in fallow soil retained infectivity up to about 9 weeks (Lister & Murant, 1967). Virus-like particles were associated with the stylet guiding sheath of L. elongatus transmitting the Scottish strain (Taylor & Robertson, 1969). Particles were associated with the stylet guiding sheath and stylet lumen of L. macrosoma transmitting the English strain, and also of L. macrosoma that had fed on plants infected with the Scottish strain, even though this strain was not transmitted by the nematode (Taylor & Robertson, 1973); one possible explanation of this is that particles of the Scottish strain are retained by L. macrosoma but are not released, as must happen slowly with L. elongatus.

Probably occurs in most host plants. Reported in at least six species in five plant families. In some hosts more than 50% of progeny seedlings are infected. Many plants infected through seed show no symptoms. Virus was transmitted to seed of raspberry and strawberry from either male or female parent, but plants pollinated with virus-carrying pollen did not become infected (Lister & Murant, 1967). Besides aiding dissemination of the virus, infection of the seed seems to provide an important means of survival of the virus in soils (Murant & Lister, 1967). Seed transmissibility is primarily dependent on information carried in RNA-1, although RNA-2 has a small additional influence (Hanada & Harrison, 1977).

Antisera with titres of up to 1/2048 are readily obtained. The virus produces a single band of precipitate in gel-diffusion tests.

The Scottish strain is closely serologically related to a strain causing spoonleaf disease of redcurrant in the Netherlands (Harrison, 1961; Maat, Van der Meer & Pfaeltzer, 1962) but most antisera readily distinguish these strains from those found in England and Germany (Cadman, 1960). An isolate from Chardonnay grapevine in the Rhine valley (Vuittenez et al., 1970) was serologically very distantly related to the Scottish strain.

In plant protection tests, plants infected with one isolate do not develop additional symptoms after challenge inoculation with a second isolate (Harrison, 1958) but infection with the second isolate can occur, even when the two isolates are closely serologically related (Murant et al., 1968). About 10% of infected protoplasts from ‘recovered’ leaves of plants containing the Scottish strain could be superinfected with the English strain (Barker & Harrison, 1978).

Raspberry ringspot virus is a typical member of the nepovirus group, but is unrelated serologically to other members.

In Nicotiana rustica sap the virus loses infectivity after 10 min at 65-70°C, storage at room temperature for 2-3 weeks, or dilution to 10-3 - 10-4. The lesion number decreases with dilution by more than the dilution factor (Harrison, 1958). The virus survives for many years in sap at -15°C.

The following modification of the procedure of Murant et al. (1972) is useful. Extract systemically infected N. clevelandii leaves in 0.05 M phosphate buffer, pH 7, containing 0.02 M 2-mercaptoethanol and clarify by addition of n-butanol to 8.5% (v/v), followed by low speed centrifugation. Precipitate the virus from the supernatant fluid by adding polyethylene glycol M. Wt 6000 to 10% (w/v) and NaCl to 1% (w/v). Resuspend the virus in 0.05 M phosphate buffer, pH 7, and concentrate by two or three cycles of differential centrifugation. Further purification may be achieved by exclusion chromatography in columns of 2% agarose beads, or by sucrose density gradient centrifugation. Virus yields are up to 4-8 mg per 100 g leaf material.

The particles are all the same size but sediment as three components (Fig. 6), apparently empty protein shells (T) and two kinds of nucleoprotein with different amounts of RNA (M and B). In equilibrium sedimentation in CsCl at 2°C, B component can be resolved into two classes of particles, B1 and B2.

Isometric, about 28 nm in diameter with a 5 or 6-sided angular outline (Harrison & Nixon, 1960). Electron micrographs show some particles completely, some partially, and some not penetrated by phosphotungstate (Fig. 7); these particles correspond respectively to the T, M and B components (Debrot, 1964; Murant et al., 1968). The protein shell of the particles probably consists of 60 polypeptide units arranged in a T = 1 icosahedral structure (Mayo, Murant & Harrison, 1971).

Nucleic acid: RNA, single-stranded. The genome comprises two essential RNA molecules, RNA-1 and RNA-2, with M. Wt 2.4 x 106 and 1.4 x 106 respectively, estimated from electrophoresis in polyacrylamide gels in non-denaturing conditions (Murant et al., 1972). Estimates from polyacrylamide gel electrophoresis in denaturing conditions (8 M urea at 60°C) were 2.14 x 106 and 1.45 x 106 respectively, but it was considered doubtful that this estimate for RNA-1 was correct (Murant & Taylor, 1978). More recent tests using RNA denatured with glyoxal and electrophoresis in 0.75% agarose gels suggest that the M. Wt of RNA-1 is possibly nearer to 2.8 x 106 (A. F. Murant & M. Taylor, unpublished data). Both RNA species contain polyadenylate sequences (M. A. Mayo, H. Barker & B. D. Harrison, unpublished data). M component particles contain one molecule of RNA-2; B component particles are of two types, one containing one molecule of RNA-1, the other two molecules of RNA-2 (Murant et al., 1972; Mayo et al., 1973). The two types of B component particle presumably correspond to the two buoyant density classes, B1 and B2. M component contains about 30% RNA and B component 43-46% RNA.


Both RNA species are necessary for infection (Harrison et al., 1972a). Pseudo-recombinant isolates can be obtained by mixing RNA-1 from one strain with RNA-2 from another strain. RNA-1 carries determinants for host range, seed transmissibility and symptom type; RNA-2 carries determinants for other symptom reactions, nematode transmissibility and serological specificity (and hence contains the coat protein cistron). Virulence is determined by both RNA species (Harrison et al., 1972b, 1974; Harrison & Hanada, 1976; Hanada & Harrison, 1977).

The virus apparently occurs in all tissues of infected plants including seeds, pollen and meristems. Infected cells contain inclusion bodies visible by light microscopy (Bujas & Milicic, 1969). In the electron microscope, the inclusion body is seen to consist of numerous small membranous sacs together with ribosomes and endoplasmic reticulum (Harrison et al., 1974). Virus particle antigen is shown by fluorescent antibody staining to be present throughout the cytoplasm of infected tobacco and N. benthamiana protoplasts but is especially concentrated in the inclusion body, suggesting that it may be a site of synthesis or assembly of virus components (Barker & Harrison, 1977a). In plants and protoplasts that were simultaneously infected with raspberry ringspot virus and with the CAM strain of tobacco rattle virus, the two viruses occurred in mixed aggregates, in association with mitochondria (Barker & Harrison, 1977b; Harrison, Hutcheson & Barker, 1977).

As with other nematode-borne viruses, plants infected with raspberry ringspot virus are patchily distributed in crops (Fig. 8), reflecting the distribution of the vectors, which migrate slowly in soils. Some strains often occur in soils together with strains of tomato black ring virus, with which they share the nematode vector, Longidorus elongatus. These two viruses are serologically unrelated. They can be distinguished from each other by the reaction of Chenopodium amaranticolor. In general, however, these and other viruses of the nepovirus group cannot be identified reliably by host range or symptomatology; serological tests are essential.

Outbreaks of disease caused by raspberry ringspot virus may be controlled by the use of immune cultivars, e.g. of raspberry (Murant, 1970, 1974) or by attacking the vector: treatment of soil with pentachloronitrobenzene or with fumigant nematicides is effective (Murant & Taylor, 1965; Taylor & Murant, 1968; Trudgill & Alphey, 1976). Experience suggests that disease problems can be minimised (Murant, 1970, 1974) by employing crop rotations that diminish nematode populations (Taylor, 1967; Thomas, 1969). 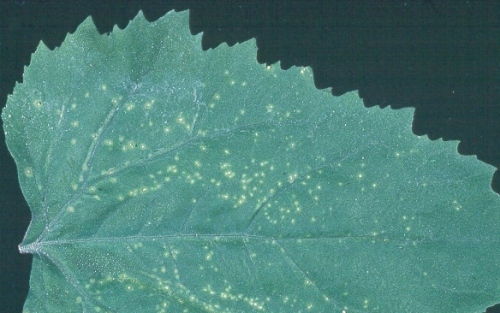 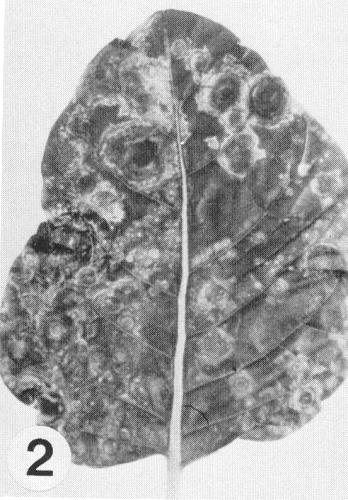 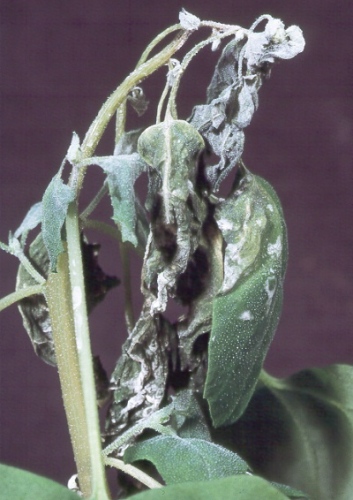 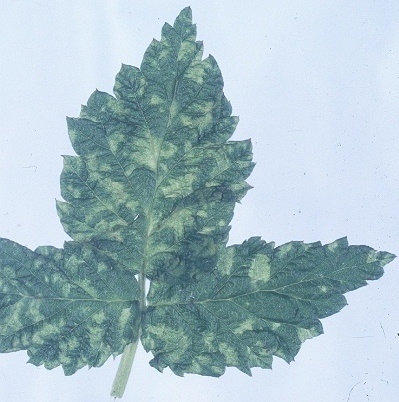 Virus particles from a purified preparation showing some completely, some partially and some not penetrated by phosphotungstate. Bar represents 50 nm. (Photograph: courtesy of the Scottish Horticultural Research Institute.)